For North Cheshire CAMRA, the end of the previous year sees the start of the merry-go-round of awards to the outstanding pubs and clubs in the branch area. The awards timeline is shown in the following table.

Pub of the Year

Pub of the Year candidates are selected based on a combination of their (NBSS) beer scores, subject to specific minimum criteria for number of scores and number of scorers, and a poll of local CAMRA members. Normally 5 pubs are chosen to appear in the ‘final’ and are then assessed according to National CAMRA guidelines by a panel of judges in February or early March. The winner is announced early March.

Club of the Year

A similar process to Pub of the Year except selection takes place based on NBSS scores only in January, with judging through to mid-March and the winner announced end March.

Community Pub of the Year

Unlike the first two awards Community Pub of the Year candidates are selected via direct nominations by North Cheshire CAMRA members, supported by brief justifications which guide the judges.

Pub (and Club) of the Season - COMPETITION TEMPORARILY SUSPENDED

A quarterly award first introduced in 2016 for pubs (and clubs) that have shown extra commitment in promoting real ale, sometimes new or innovative pub or clubs.

Click to see past winners and runners-up in the Branch Awards Roll of Honour.

North Cheshire Pub of the Year 2022

Click https://www.warringtonguardian.co.uk/news/20160957.little-manor-wins-north-cheshire-camra-pub-year-award/ to see the report in the Warrington Guardian Online 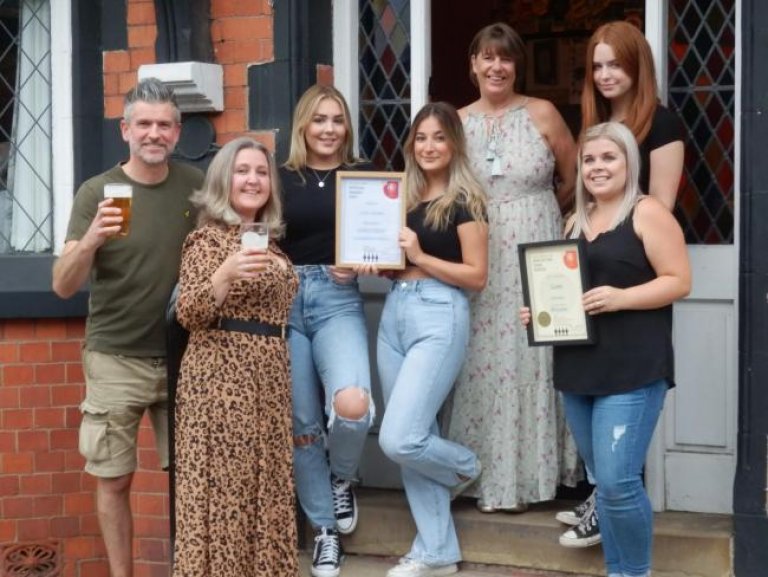 Pub of the Year - Lion, Moulton

The following article is from the Northwich Guardian website at https://www.northwichguardian.co.uk/news/19534759.lion-moulton-win-camras-pub-year-award/

A POPULAR Moulton pub has won a ‘thoroughly deserved’ award for pub of the year in North Cheshire.

The Lion, on Main Road, between Northwich and Winsford, has been recognised by North Cheshire Campaign for Real Ale (CAMRA) for their services and beers in the last year.

They won the award in 2020 but they could not be presented the award, so after the CAMRA members had sent in their beers scores, the Lion came out top once again and were awarded the title.

"It's exciting to be able to visit our great pubs once again and if it hadn't for a global pandemic we would have presented this award a lot sooner.”

The award covers nearly 400 premises with just over 50 per cent that sell cask ale from Warrington to Frodsham and Northwich.

Firstly ale is assessed, then customer service, cleanliness, atmosphere, facilities and the range of ales.

And Doll Jones, joint owner of the Lion, could not be more pleased to be presented with the prize.

“It’s been an extremely difficult 16 months as it has been for everybody is hospitality and it was quite frightening financially.

“We weren’t sure at the start of things whether it would be even possible to reopen so to be able to reopen, to have received huge support from the village, the quality of the ale being recognised and the service that we give, stuff like that makes it all worthwhile."

The pub had to get loans on top of the government grant to stay afloat, but now slowly but surely they are on their way back up.

Doll, who is from Rusholme and has been born and bred in a pub background, continued: “This sort of recognition, publicity and support all goes to help us carry on what we’re doing.

“Our staff have been brilliant. Every single member of staff has come back. It’s been really challenging for them but they’ve adapted really well to every change we’ve had to make.

You can read the rest of this article in the Northwich Guardian Website at https://www.northwichguardian.co.uk/news/19534759.lion-moulton-win-camras-pub-year- 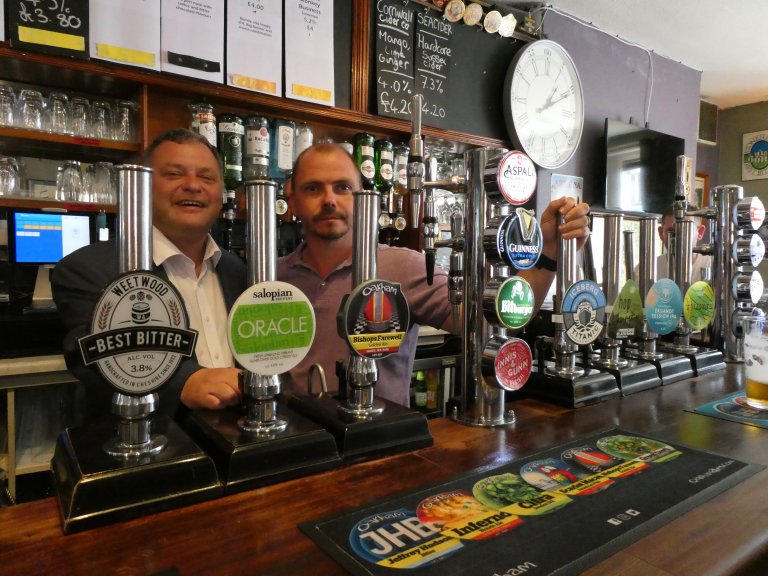 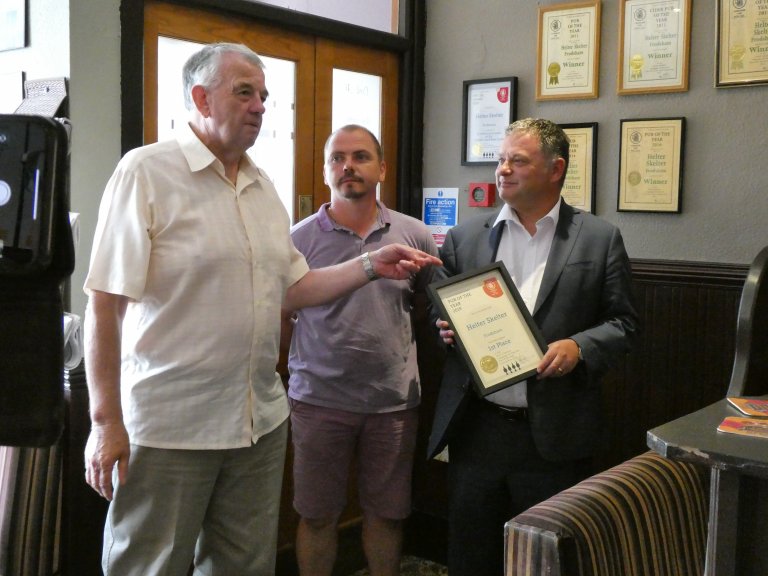 So for the fifth time in nine years North Cheshire CAMRA have judged the Helter Skelter as their Branch Pub of the Year.

Helter Skelter is by far North Cheshire CAMRA’s most awarded pub having won this title seven times since the award was launched thirty years ago.

A regular in CAMRA’s national Good Beer Guide for the past ten years, the quality of the pub’s real ales is unquestionable but this award doesn’t just recognize the quality of the beer as it was also judged against a number of other national CAMRA criteria which focus on it’s broader appeal to its customers and its community, for example: service and welcome, style and décor, community focus and atmosphere. To win this award requires a great all-round team effort from everybody at the pub.

Landlord Nick Broome commented on behalf of the pub: ‘In becoming, once again the North Cheshire CAMRA Pub of the Year, it shows the hard work and dedication is really worth it. My team, headed up in the bar by Joe Flett, work tirelessly for this great pub and deserve to share this award. To have won for the fifth time in my tenure and the seventh overall for the pub, this little unassuming gem, really is the essence of our devotion and commitment to what is becoming a harder and harder trading environment.’

Appleton Thorn Village Hall was duly crowned North Cheshire CAMRA Club of the Year for the 5th year in succession with the presentation to be arranged for the Autumn. However at the same time it was announced that they had gone one step further than last year's appearance in CAMRA's national final and were indeed National Club of the Year 2019 . An amazing and well deserved success for Chris and his team, highlighting the Village Hall as CAMRA's most-decorated club having won the national title on three previous occasions, last time in 2008. 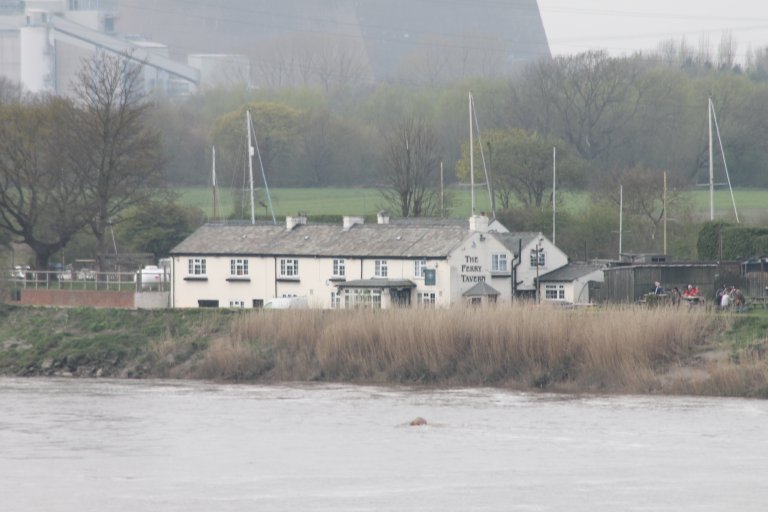 People flocked to the Ferry Tavern recently for a Tap Takeover (for a limited number of days the majority of the hand pumps dispense a range of beers from a specific brewery) I could say they were only here for the beer - BUT THERE IS MUCH MORE TO THIS PUB.

Andy and Jade have set out to please their customers by providing the extras that make their pub special: everything from Fell Walking to Art Classes, from quizzes to Boxing Fitness sessions, from pickled onion contests to Glastonferry musical extravaganza and Quarterly Beer festivals, the famous Fish & Chips! I could go on but suffice it to say that in many ways it is the hub of the Community. The pub’s success is evidenced by previous CAMRA certificates for “Pub of the Season” and “20 years consecutive appearance in the GBG” as well as unsolicited praise from the Liverpool Echo and being voted “Best pub in Warrington” by readers of The Warrington Guardian.

Jade had a good start, taking over from her parents as probably the youngest licensee in Cheshire and now, with the addition of Andy’s imagination and energy they have built up the Ferry as the centre of their empire and the local hub of a wide range of activities The future is safe in Mulholland hands: 5-year-old Charlie has already been seen pretending to draw his first pint! 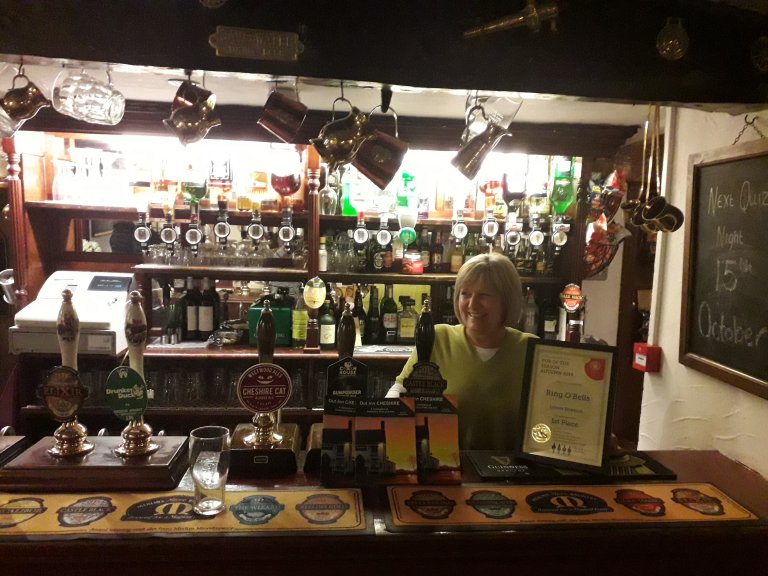 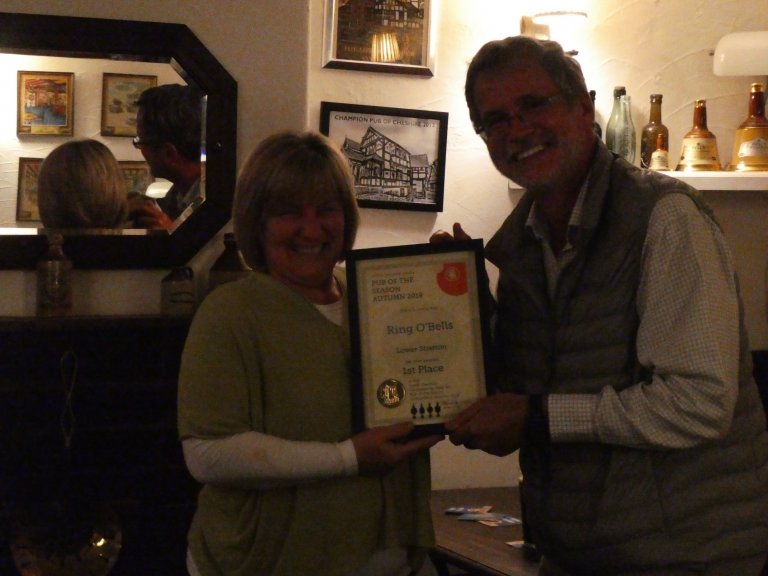 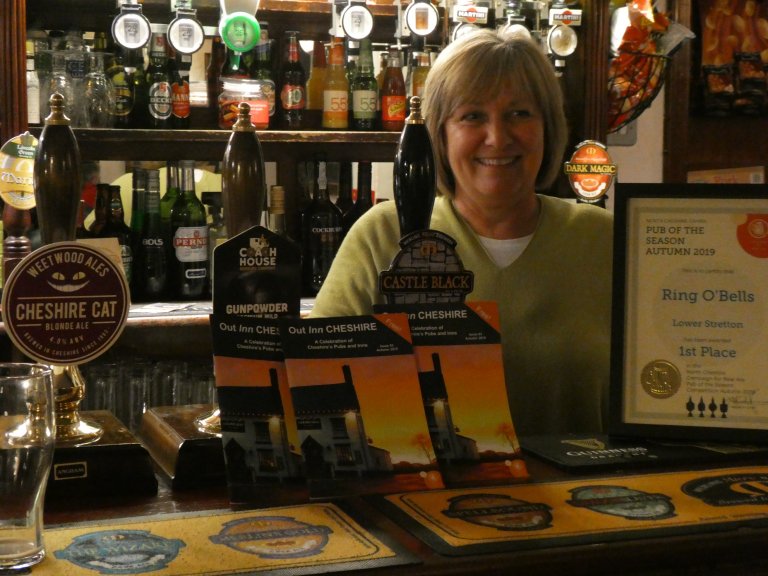 The Ring O'Bells in Lower Stretton is a traditional, unspoilt village local, just as pubs used to be: no intrusive music or games machines, just conversation, banter and of course, beer. The entry in CAMRA’s Pub Heritage list recognizes the historic pub interior as being of some regional importance with the internal layout unchanged since 1960’s and some of the fixtures, including the bar counter bar back and a fireplace, harking back to the 1930’s. Landlady Liz is justly proud of the pub’s heritage and is keen to protect it.

Stretton Parish Council successfully applied to have the pub listed as an Asset of Community Value in 2016 and based their case on the pub being the only community space available in Lower Stretton. As a result the local community uses the pub both for meetings and a swathe of different community events over the course of the year. A true hub of the community!

The pub has featured in CAMRA’s Good Beer Guide for fifteen of the last twenty years including the last two under Liz. It is also a former North Cheshire CAMRA Pub of the Year from 2007.

But none of the aforesaid formed the selection of the Ring O’Bells as North Cheshire CAMRA’s Pub of the Season for Autumn 2019. This award was for dedication ‘above and beyond’ in support of dark beers such as Mild, Porter and Stout, all of which CAMRA sees as endangered beer styles. There are very few pubs in our branch area serving Mild on a regular basis, whilst you can count on a few fingers those that regularly serve more than one dark beer, as here. We gathered on a cold and wet evening in October to make the award to be greeted by a welcoming and roaring fire. We had of course to sample the dark beers and both Coach House Gunpowder Mild and Merlin Castle Black were on good form, ably supported by four lighter beers: Merlin Elixir, Weetwood Cheshire Cat, George Wright Drunken Duck and Woods Shropshire Lad. Liz is also a staunch supporter of small, independent local breweries with Gunpowder Mild and a couple of Merlin Beers available regularly. Indeed as she told us, at a previous pub she had showcased the Merlin beer range for the brewery’s initial launch. 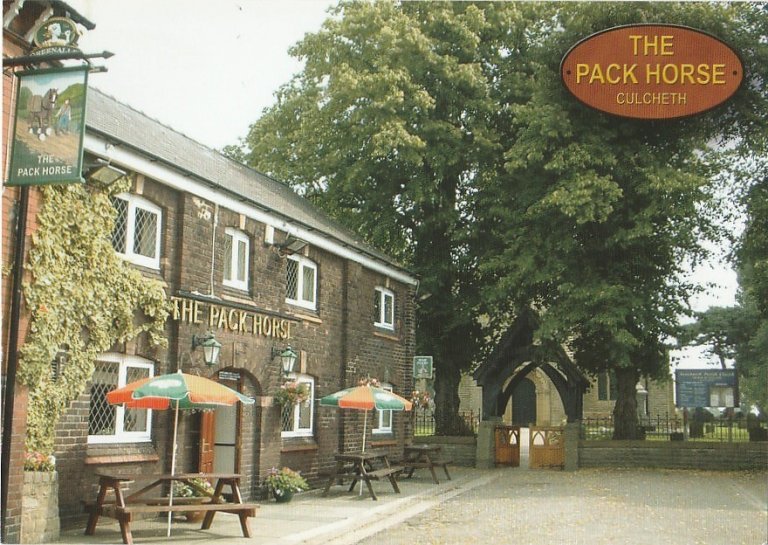 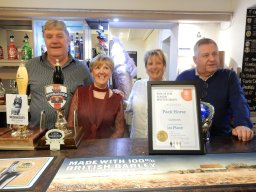 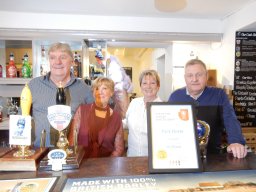 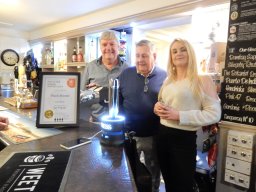 Why not venture out to Culcheth and try out this splendid old-fashioned pub? The oldest pub in the village, the Pack Horse dates back to the 18th century with the original wooden beams still in place. It has a true village atmosphere with beer and chat at the centre of things. A little out of the way but in a lovely secluded location at the very bottom of Church Street next to the church. The management team have run the pub for 15 years, building a true vibrant community hub.

The bar is well stocked with a fine selection of wines and gins plus 3 carefully selected real ales which constantly rotate and are always in excellent condition. These often include at least one beer from a local brewery and are sometimes ones not easily found in nearby pubs. The staff are knowledgeable and will help with your selection if required. George Wright Pipedream is a particular favourite of the regulars and was on the night we made the presentation in February. If the weather is pleasant you can sit outside in the quiet cul de sac overlooking the churchyard as you can see in the photo.

Excellent food is served on Sundays only between 12pm and 6pm with the speciality being a Sunday Roast which is really good value at £13.95 for 3 courses.